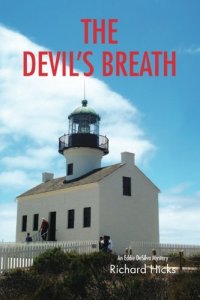 I was really excited to read Richard Hicks’ new mystery novel, “The Devil’s Breath.” I am a huge lover of all things mystery/thriller and Richard Hicks did not disappoint. First, I have to praise Richard for his consistency with his writing style. The switch from point of views was flawless and I was so impressed. I plan on picking up every other book Richard has written. I am now a HUGE fan!

Eddie DeSilva is a retired cop called in by the chief of police to help out on a cold case. The chief of police has a personal interest in this particular case as it directly affects the life of her brother. Well, the current state of her brother, I should say. Eddie is an awesome character that I really bonded with while reading this book. Richard has a way of making sure that this character has a great sense of humor and I engaged in lots of giggles along the way.

Might I add that the romantic aspect is between two characters that are older and sometimes referred to as seniors…indirectly that is. The indirectness of the relationships really made me laugh. Little comments and inner thoughts, I found it to be the perfect touch for the personal life of DeSilva who was in a not-so-funny situation solving this case.

Richard Hicks can throw in the personality of a young person just as well. Sunny Szabo happens to be a totally lovable character that is a key part in DeSilva’s investigation.  Hicks wrote her to be a down to earth kind of person but with her own set of issues, the kinds of issues that keep her home and lead others to believe she is strange. Sunny is a recovering meth addict that suffers from agoraphobia. Without Sunny, this story just wouldn’t be right – I can’t even imagine it.

For me, this story was perfect. I would like to see “The Devil’s Breath” with a more attractive cover, maybe something with red flames to indicate that the story is about fire. I learned pretty early on that “The Devil’s Breath” was a reference to the wind in California and that wind has its role in the fires that are set in this tale of arson.

I can highly recommend “The Devil’s Breath” by Richard Hicks to lovers of a good mystery. Twists and turns kept me guessing, and when it came to the end I was sad.  A sadness that comes with a smile knowing that there are more books that feature Eddie DeSilva and high hopes that this one won’t be the last!