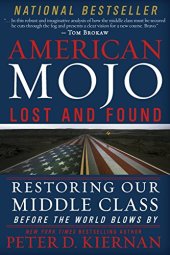 “American Mojo: Lost and Found” by Peter D. Kiernan called my attention immediately as history, politics, and economics are among my favorite non-fiction topics, being a Political Sc. BA myself. As I completed college in Venezuela, I gathered most American facts randomly through the news and in conversations with others. I really craved seeing all of it together in one book, to better understand the American political-economic contemporary history. As soon as I began reading, I realized that this book was not a summary of facts; on the contrary, it was the story of America’s middle class, told by the author with such skill that it read as page-turning fiction. It begins recounting the Jackal’s terrorist attack against the OPEC just before Christmas in 1975, during a three-day oil price conference in Vienna.

Kiernan does not just tell the story; his amazing writing style hooks the reader from the beginning and does not let him go even after the end of the book. Readers will go on a journey through American history, in search of our middle class, in this well written entertaining view of the facts. Then Kiernan presents the reader with his own point of view on what needs to happen to re-establish the middle class in America. I must say, being a historical fiction reader and writer myself, that I have never read a book like this one. It is fact driven, but reads like fiction as historical people become characters, showing the reader the facts through their eyes. This gives the reader an inside look of what actually took place. In order to do this Keirnan must not just be a skillful writer, but he must also be an amazing researcher.

Overall, “American Mojo: Lost and Found” by Peter D. Kiernan is an entertaining, eye opening must-read. I definitely recommend it to non-fiction fans and fiction fans, anyone who enjoys political thrillers, economics, and history, but to anyone wondering what happened to the middle class in America. A five star must-read!