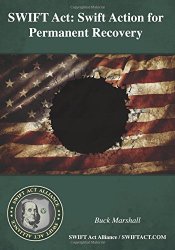 “SWIFT Act: Swift Action for Permanent Recovery” by Buck Marshall couldn’t have been better timed as I received it in the midst of such a horrible election year. The Preface pretty much hooked me through the following statement:

“Offshoring is not Trade;

Banks are not Factories.”

In the first part of the book, Marshall provides a recount of what happened with our economy through the course of each presidency. This portion of the book is not only scary it is an eye opener. As a Political Science major, I have always followed the economy in a generalized way, as well as international politics. What Marshall provides in the first portion of his book, is a factual, and chronological map of how the economy evolved from a real value one to a new economy, based on speculation.

In other words, we went from producing goods in the US to importing them. This evolution happened through a series of policies generated to cater to presidential campaigns serving the financial sector. This portion of the book blew my mind, as it put everything into perspective in such a way that I was able to picture the entire process in my head.

In the second part of the book, Marshall introduces the “SWIFT Act,” a plan for permanent recovery of the economy. Marshall presents options for each major problem we are currently experiencing in the new economy. It is here the reader can exercise creativity and personal points of view to generate their own opinion as to whether or not they believe this Act could work. Furthermore, if they agree with the process, the reader can become a part of it by visiting the website and signing the petition.

Overall, I found “SWIFT Act: Swift Action for Permanent Recovery” by Buck Marshall to be an absolute eye opener. Marshall’s research and ability to present how the new economy evolved, and how it is hurting our nation and the world is impressive. My only comment on the reason I am giving it 4.5 stars out of five is on the formatting of the book. I think that the formatting in the second part book made it a little repetitive, as he had to re-visit each problem to present the proposed solution. Having said that, I hope readers do not let that stop them from reading it to the end. I am happy I did.

I definitely recommend, encourage, and hope that everyone reads and follows up with “SWIFT Act: Swift Action for Permanent Recovery” by Buck Marshall!