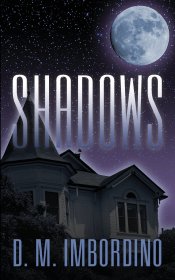 “Shadows” by D.M. Imbordino follows an ordinary girl (so we’re lead to believe) named Amanda who moves to a small quaint town in Maine with her mom and brother. Amanda befriends an Indian family that tells her the house isn’t so ordinary and rather kind of sinister.

The story starts with an ordinary teen moving to Maine with her twin brother and mom after her mom’s business venture falls through. They don’t have much money so their mom buys a house for a steal from a friend. Upon arrival, the family notes the house seems rather creepy like any other old mansion. Readers learn on a night when Amanda is home alone, that the house is hiding more than dust bunnies and cobwebs in its walls. You also learn that Amanda may not be just an ordinary girl.

“Shadows” starts off slow with the essence of a G-rated story, with Amanda’s mom being so strict, and easily peeved by minor things. Then it starts turning into a feel-good romance between her and her friends brother. It quickly spirals from there into a scare-fest that kept me turning the pages. Imbordino’s writing style is descriptive, airy, and at times twisted.

This book is great for teens, adults, or anyone who loves a good scare. I loved the twist in the plot line I never saw coming! As a former ghost hunter, it was great to know the history of the hauntings of this house, and what the characters were up against to fight the entities on the property. I also think that some well thought out research went into writing “Shadows,” and I have to give kudos for that.

I think the only thing I’d have to change about “Shadows” by D.M. Imbordino is the ending, unless there is a sequel to follow!! Which I would love to read! However, if sadly, no sequel is in the works, I’d have to say I would alter the ending a bit to not be so open ended. I would love to know what becomes of Marcus and Amanda. All in all, I think it was a great book! I hope to read more Imbordino’s writing in the future.