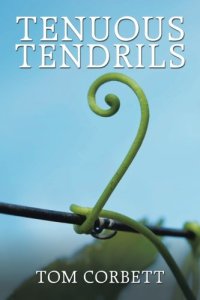 No one will disagree that living in the 60’s was a turbulent time. Many disagreed with the Vietnam War, and there was a great concern for those individuals who went to war and the lack of the government, who refused to make decisions or admit that going into this war was a mistake.

“Tenuous Tendrils” by Tom Corbett follows Joshua Connelly and a group of fellow college students, who protested the war in their own way until things got out of hand and Josh had no choice but flee to Canada. Often wavering, Josh contemplated harmless sit-ins and protests, but burning documents and buildings went beyond harmless. Now years later, as Josh is retiring from being a college professor, many of those old friends come back into his life as well as his sister Rachel who he hasn’t seen since he fled.

The beginning of the book spends a considerable amount of time with detailed conversations between Josh and Rachel. I found this to be a bit cumbersome, however, I do think that it was necessary, for the author to portray the impact of Josh leaving on his younger sister and his family. For me, the most interesting part was when Josh and his former college “antiwar” friends reunited and also addressed their concerns about having gone too far in protests. At the same time, these earlier friends were still connected regardless of time and differences of opinions. Some past friends make an impact on your life regardless of how many years have passed.

I found the author’s dialogue to be true to the era and times. The constant cursing and vulgarity did turn me off a bit yet at the same time having grown up in the 60s I know it was part of the lifestyle. The author did an excellent job of addressing the inner conflict and choices one made when they were trying hard to come to terms with their interpretation of events.

Quite an interesting read, well written and certainly made me relive growing up in the 60’s, friends who made an impact on me and choices one makes.  I would recommend “Tenuous Tendrils” by Tom Corbett, just know going into it there is an abundance of profane language.