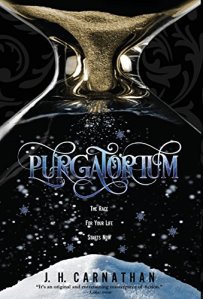 “Purgatorium” follows a young, nameless man who is forced to repeat the same day over and over again, unable to remember the previous cycle. One day, seven strangers appear before him and explain that his consciousness is trapped in a purgatory-like space called Purgatorium, while his body lies in a coma. He has a short amount of time to face the demons keeping him trapped within Purgatorium and reclaim his body before his life support is cut.

The setting is the strongest point of this novel. Author J. H. Carnathan builds a lush, dream-like atmosphere with an intriguing take on the afterlife concept that is so popular across different story-telling mediums. Inside the main character’s Purgatorium, a single day takes places within an hour of time in the living world. Lost body parts can be regenerated. Someone who is killed in Purgatorium one day will wake up perfectly fine the next. There is a smooth, visual element that flows throughout the story and adds an interesting dimension to the plot.

The main storyline is accompanied by a series of flashbacks that explain the main character’s descent into his Purgatorium. They flesh out his motives and, since he has lost his memory, the readers get to learn his story right along with him. These sections are the most intriguing parts of the novel.

As wonderful as some aspects of “Purgatorium” are, they often overshadow the main plot and characters. The narrator felt flat and most of the side characters were difficult to differentiate, sharing similar physical descriptions and only one or two defining personality traits.

The plot itself meanders at times. Most of the action happens in the last hundred pages, with the previous three hundred used to explore the setting and cover backstory. Various twists and turns keep the audience engaged, but at times there are too many to keep track of. The last quarter of the book follows plot twist after plot twist, and the reader is left wondering which one to believe.

There are also times when the prose and sentence syntax grow repetitive, with the same three or four phrases being used to describe various locations, people, and objects. This, combined with the highly visual element of the novel sometimes worked against itself, making “Purgatorium” read more like a script than a novel.

“Purgatorium” has a number of ups and downs, and with its fascinating setting and mysterious premise, anyone in the mood for quirky and engaging world-building should give this novel a try.