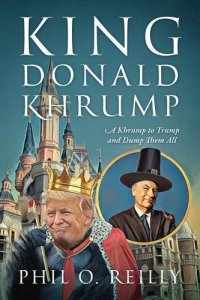 KING DONALD KHRUMP: A KHRUMP TO TRUMP AND DUMP THEM ALL

Welcome to a parallel universe in the kingdom of Donald Khrump. In this land, everything appears to be similar to ours but kookier. For example, they are ruled by a narcissistic obnoxious orange skinned leader whose first name is Donald. The commoners are divided between two political groups referred to as the RNC and the DNC. In their case, the RNC stands for Repugnican National Committee. The DNC is ruled by the Dreamocrats. They have a biased news station. I would continue, but I realized that not a whole lot is different in the land of this story versus my land.

“King Donald Khrump: A Khrump to Trump and Dump Them All” is narrated by Phil O. Reilly who is a news broadcaster with the FIX News Network. He offers the official historical and biographical account of King Donald’s first 100 days on the throne. He begins by giving an account of King Donald’s miraculous birth as the first genetically engineered human-gorilla hybrid. He was birthed in an experimental hospital that was funded by the Repugnican National Committee (RNC) and the FIX News Network. From there, Phil O. Reilly gives an account of King Donald’s formative years leading up to his debates with Rodina Hilton. After all of this excitement, Phil O. Reilly provides journal entries of King Donald’s first one hundred days on the throne. Well, almost one hundred days of entries. Every single entry is extremely informative and entertaining. The story comes to an exciting conclusion that will leave readers wondering what will happen next!

I really enjoyed “King Donald Khrump: A Khrump to Trump and Dump Them All.” This satirical work of fiction provided me with some much-needed entertainment regarding the current political situation in the United States. Not being a huge fan of any politician, I was not offended by the ideas presented in this story. Although I have to admit that there are some cringe-worthy moments in there that hit a little too close to home. For example, King Donald’s obsession with the “brownies” and “scarf heads” who are people who bear a close resemblance to some of our own stigmatized groups. Readers who don’t take their politics too seriously will enjoy the author’s use of dramatic license to produce a novel that will have them laughing out loud. I know I did.