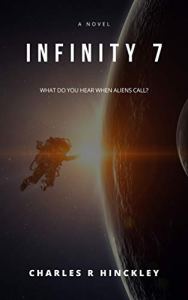 When suspicious communication comes from the Metis 3 Space Station requesting a team to investigate malfunctions and the possibility of alien life forms, astronaut and astrophysicist John Collins knows he is headed back to space.  Developer of the Metis Space Program, Collins has dedicated his professional career to this project, at great personal cost, and will do whatever it takes to keep the funding flowing for this research. Discovery of alien spores found in soil samples have been mishandled by Forrest, one of the techs, putting the entire station in danger of contamination.  Strange behavior from the crew and the mainframe computer system suggest alien forces have taken over as an entranced crew member is determined to destroy the space station.  Fighting hallucinations and madness caused by exposure to the spore toxins, John Collins is in for the fight of his life and the future of the earth.

This story is a fantastic read!  I really enjoyed the writing – Hinckley has a talent for creating vivid, colorful, life-like descriptions in every paragraph, and not a word is wasted. The plotline is complex without being overwhelming; the various layers of the story are sophisticated and round out the entire story as a whole.

The author’s imagination seems limitless as the creativity displayed in the scenes and the settings compel the reader to plow through the pages.  The hallucination scenes are frightening, the nightmarish-like sequences had me questioning reality right alongside the characters. Somehow, even though Hinckley paints clear visuals, he also leaves enough room for the reader to incorporate their own visions as well, and that is one of the things I love so much about a well-told story.

And the characters – wow!  From the creepy camera that follows the crew around (yes, the camera is life-like and so deemed a character), to the sexy holographic woman that was “enhanced” by one of the techs, to the crew members and a mysterious old man – all the characters have dimension and personality – even the alien spores! The protagonist is realistic and likable – he’s a single dad trying to raise a teenage daughter while grieving a monumental loss.  He’s also flawed and has questionable motives throughout but is definitely someone readers will want to succeed.

Overall, I found this to be an incredible read and I think the story sets itself up nicely to be on the big screen one day.  Readers of sci-fi and psychological thrillers will enjoy “Infinity 7” by Charles R. Hinckley.