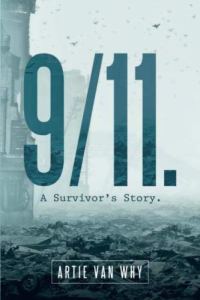 I, and many millions of Americans still clearly remember the events of 9/11/2001. It will be a historic date for decades to come. Just about everyone remembers where or what they were doing at the exact moment on that sad day. Even though it was a sad day, it later brought the country together. It didn’t matter what race, sex, creed, or your heritage, we were all Americans first! That historic and unforgettable day is on par with D-Day, World War 1 and 2, and all the important dates that have affected America.

“9/11. A Survivor’s Story” written by Artie Van Why, is a book based on the events of 9/11. In addition, he speaks of his personal observations and struggles since that day. The central theme of the book is what he calls the “Forgotten Majority.” These were the store owners, the delivery personnel, the visiting tourists, and the common citizen who observed that horrific event. He speaks of the “after effects” on those people, including himself. Essentially, the emotional toll that he and others experienced after the dust, building materials and bodies were removed. He speaks of actually observing people jumping from the towers, with some so close that he could see their faces just before they hit the ground.

Many Americans do indeed think about the thousands of people killed by the airplanes crashing into the towers, along with the subsequent fire and smoke inhalation, but rarely do we think of the “observers.” To actually witness human bodies jumping from such heights is mind-boggling. The author speaks eloquently of his personal struggles with not only 9/11, but the personal struggles in his life before and after the events.

Many people after 9/11, and some still until this day, have received counseling for the myriad of mental issues, PTSD, depression, suicidal thoughts, and personal fears. “9/11. A Survivor’s Story” by Artie Van Why, is a personal, eyewitness account of the events on that day that concentrates on the “forgotten.” A well-written revealing story to those of us that weren’t actually there. 5 Stars!