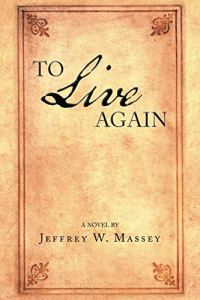 “To Live Again” by Jeffrey W. Massey, revolves around protagonist Carter Flemming, a real estate and construction business mogul. Flemming attracted quite a following with his confidence and riches, yet he is now facing difficult decisions surrounding the death of his son Mark, an illicit affair, and his damaged reputation. Flemming finds that many of those he thought would stand by him during his crisis turned tail and ran. Even his wife Mattie, who has in the past ignored his egotistical behavior, turns against him.

Under the pretense of hosting his annual dove hunt at “The Farm,” Flemming will make choices that will have serious repercussions for all. For Flemming, the annual dove hunt that includes some of the most powerful and rich clientele is a way to leave stress and rumor behind. What Flemming fails to realize that is his troubles haven’t yet begun.

Flemming only tells one person, his close friend and partner, that his stay at “The Farm” might be permanent, and he is relinquishing the control of his construction business to his son Patrick. Even though he has another son Willie, both Patrick and Flemming realize Willie doesn’t have the know-how to run a multi-million-dollar firm.

Massey’s writing is attention-grabbing. His story is character driven and filled with numerous twists and turns. When I first started reading my thoughts were “of course the rich are above the law and make excuses for all their woes.” However, what I do know is we all are human and make mistakes. Still, Massey’s characters angered me in many ways, first and foremost being that some don’t care who they hurt to get what they want and lying is one of their main traits. Given this storyline is about forgiveness and redemption I should re-think my position, but I cannot.

The storyline is fast-paced with numerous well-developed characters that readers will love or hate. I love when an author’s writing makes me feel so strongly about the characters. I found Red Moore to be an intriguing character, who lost his wife and has great difficulty moving on. As a reader you can feel as he slowly begins to lose touch with reality. Red’s daughter, Christy, is the voice of sanity, yet she cannot stop Red from going down the road he is on.

Overall, “To Live Again” is a great read that will have readers rethink how they judge others and how they justify discretions in their own lives. Jeffrey W. Massey’s book is a must-read.