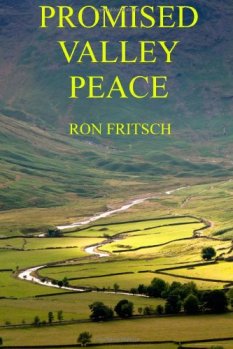 “Promised Valley Peace” by Ron Fritsch is the fourth novel in the Promised Valley Series.  It follows: Promised Valley Rebellion (2010), Promised Valley War (2011), and Promised Valley Conspiracy (2012).  This adventure is set during the prehistoric times when the people relied heavily on their belief in gods and based their actions and decision upon what they felt their god wanted them to do. This brought about a great deal of war among the various peoples around the Promised Valley. The valley people were farmers who lived in the fertile valley. The hill people were hunters. The town people live under the rule of a king, and the river people were traders. Each group had their own political agenda in regards to the valley. Many believed that their gods promised this fertile land to them. In order to get this land, going to war was favored.  Over time many lives were lost, including those that were beloved to the main characters in this story.

“Promised Valley Peace” concludes this epic tale by having a king make a huge decision that would bring an end to the warring. He reveals a very important secret to explain why he chooses to make a huge sacrifice so that peace would come to the valley.  The conclusion to this series involves an interesting twist, yet upon further reflection, you realize that he did what he had to do to stop the fighting.

While this story is set at the end of prehistoric times, it made me reflect on how we share many of the same issues even today. For the people of this valley, they had horses to go to war, in our modern times we have weapons of mass destruction. Yet we share a common issue of having to deal with people that are greedy and manipulative for their own gain. In the story and in real life, people from different backgrounds will go against each other because of perceived differences, yet at our core we all come from the same origin.

I found Ron Fritsch’s “Promised Valley Peace” very thought-provoking and I enjoyed being able to return to see what was happening in the lives of these people. Even though they were created in the author’s mind, he writes in such a way that the land and the people are very real and the readers who have been following this series will be happy to see how it concludes.