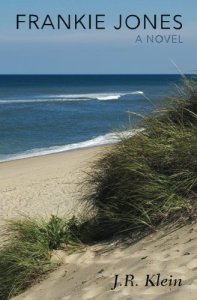 “Frankie Jones” by J.R. Klein is a wonderful, thought-provoking novel about one man and his quest for the American Dream.

Frankie Jones had a rough start in life, but he used that experience to propel him forward. Left on his own at an early age, he chose a path that enabled him to work in a diner while saving money to take off and explore the world. One of the employees at the diner became a surrogate father to Frankie. As he traveled, Frankie’s relationship with this man seemed to help him feel like he maintained somewhat of an anchor to a home. While traveling, Frankie studies the great classics, which adds to his worldliness.

Upon returning to the United States, he comes home to a great loss, however, he continues to propel himself forward and get a higher education. He quickly becomes a successful journalist. His rough past and his more sophisticated present give Frankie the ability to blend into any environment so that he can observe and write the real story about what is happening. Falling in love with a magnificent woman creates a quandary for Frankie, because when wanderlust strikes him and he hits the road again, he must live with wondering about what could have been if he had stayed. When Frankie gets settled in a new place, his experiences teach him a great deal about the importance of living in the present, but one experience shows him that doing this can also cause others a great deal of pain and disappointment.

The author, J.R. Klein, has a gift for creating a story that not only allows the reader to step into and enjoy the ride, but also take a step back and consider the thought provoking ramifications of rash decisions. I think most of us have a bit of Frankie Jones in us. While we might not take off to explore the world, there is a part of us that would like to untether ourselves, pack a small bag and go. While I found myself relating to Frankie, and cheering him on, I also got to see how he was affected by his choices, especially as he matured. Thought-provoking material!

I highly recommend “Frankie Jones” by J.R. Klein for readers who enjoy a good escape, but know that they will be pulled back into reality at the end.